What is green hydrogen

Hydrogen is the most abundant and lightest of the elements on earth, it is not found free in nature and must be "extracted" from various sources. One of them is based on renewable energies that drive the electrolysis of water. This is the so-called "green hydrogen".

Hydrogen it has the highest energy content of common fuels by weight (almost three times that of naphtha).

As a highly flexible energy carrier, hydrogen offers a clean, integrated, and multi-sectoral alternative for energy systems that will make a decisive contribution to solving the environmental problem and securing the energy future.

How is it obtained? 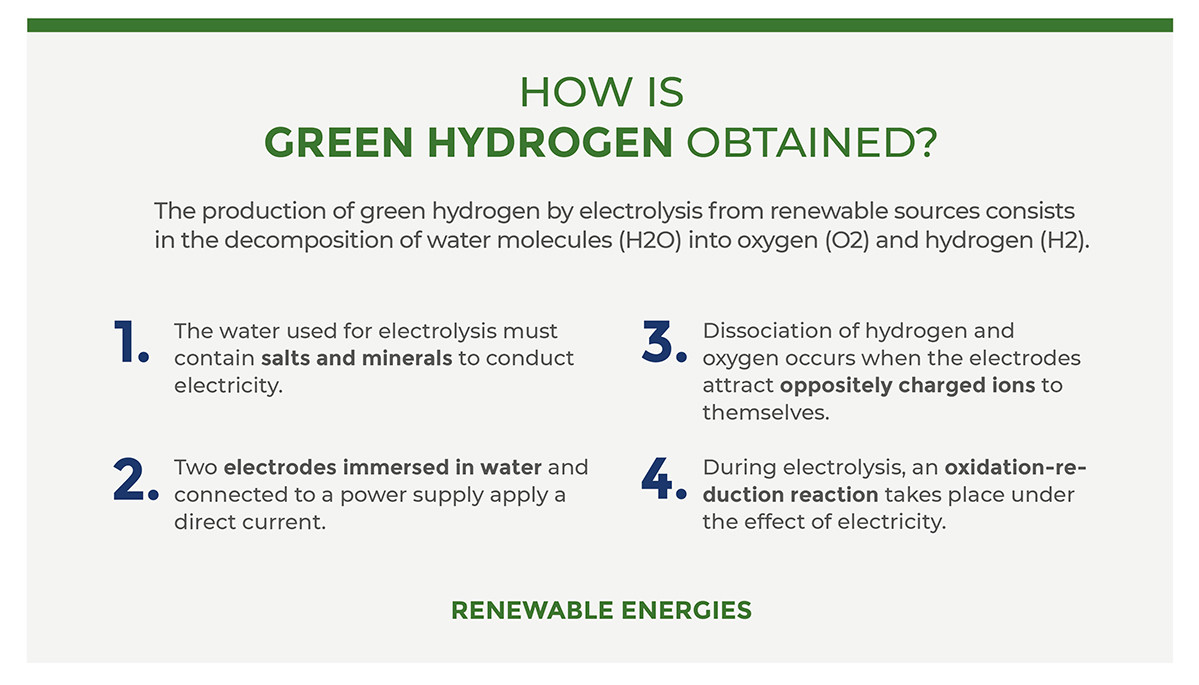 Its extraction is carried out in specific plants for it, they are ecological plants that through the generation of its own energy (by windmills or similar) and the use of clean fresh water, generate the so-called Green Hydrogen (H2v) through Electrolysis.

ELECTROLYSIS: This method uses electric current to separate the hydrogen (H2) from the oxygen (O) in water (H2O), so if this electricity is obtained from renewable sources, we will produce energy without emitting carbon dioxide into the atmosphere.

Through this process, green hydrogen is known as the energy of the future and so is the fuel that would be made from its material.

These two elements are obtained by reacting hydrogen and oxygen in a fuel cell.

The great versatility of hydrogen allows its use in those consumption niches that are very difficult to decarbonize, such as heavy

The Government of Río Negro, together with the impulse of the Nation and the whole Region, has decided to take this issue as a public policy of the State, that is why we say that the future is today, to consolidate a sustainable development and environment for all the inhabitants of our province.

The development of green hydrogen contributes to the adaptation process contemplated in the 2030 Agenda and the Sustainable Development Goals of the United Nations, to which the Province of Rio Negro adhered in March 2018.

Hydrogen technologies have reached their stage of industrial maturity, based on decades of basic and applied scientific development, and there is evidence of consistency and market signals around the world regarding the current status of green hydrogen, as well as its concrete short, medium and long - term future.

In the strategy of adapting, mitigating, and combating climate change, States are required to implement immediate proactive policy actions. In this sense, the development of this type of cutting-edge technology pursues regional human development through awareness, study and implementation in the province of applied science.

Therefore, the provincial government has assumed as a State Policy to promote scientific, academic, and productive development through actions where these are complemented in a virtuous way with environmental sustainability, promoting the generation of new energy vectors based on renewable energy sources and their application through scientific and technical development such as green hydrogen throughout its production chain.

The Province of Rio Negro has unique natural conditions to become a key local, national, and international player in the field of green hydrogen economy. At the same time, it has a vast scientific knowledge and institutions qualified for the development of this type of technology. In the work of maximizing industrialization and investment possibilities in our province, given that we are located in a strategic place for the development of green hydrogen, we would position the province at the forefront of this type of production.

On the other hand, according to the local scientific and specialized community plus the scientific studies of FRAUNHOFER, around the 42nd parallel, the optimal geographical location in wind and water efficiency for this type of project is in our province.
Wind efficiency levels are above 50% (maximum level) vs. 23% that is operating for example in Germany, positioning Rio Negro as a destination of high interest for the development of these technologies.

The world is eager to find a new energy carrier to replace oil and gas, and hydrogen, as the most energy-dense element, is the natural driver for this. Hydrogen technologies are reaching their stage of industrial maturity, based on decades of basic and applied scientific development. There is consistent evidence and signals from the world market regarding the current hydrogen situation, as well as its concrete short, medium, and long- term future.

There are three types of hydrogen: grey (fossil), blue (climate-neutral hydrogen through "Carbon Capture and Storage - CCS") and green hydrogen (sustainable production based on renewable energy). Each of these options has a different time scale, volume, and cost, while grey hydrogen helps kick-start the market, the "net development direction/goal" worldwide is towards green hydrogen.

The Argentine Republic and, in particular, the Province of Río Negro, have unique natural conditions to become a key local, national, and international player in the green hydrogen economy.

• In the work of maximizing industrialization and investment possibilities in our province, given that we are in a strategic place for the development of green hydrogen, we would position the province at the forefront of this type of production.

• In terms of economic geography, there would be an unprecedented process of environmentally friendly industrialization (triple impact) for the Province.

• Promote the provincial and national development of a technology pro- bated in the world and the production of renewable fuel with the highest energy density from Patagonia Argentina, which is being demanded by the main global powers.

• Attract private capital to the Province of Rio Negro for the development and implementation of new technologies related to the production of green hydrogen, including wind power developments at GW (Gigawatt) level.

• Intensive generation of skilled and unskilled labor within the Province of Rio Negro.

• Promote the reduction of the CO2 footprint in the Argentinean industry through the local consumption of green hydrogen produced in the Province of Rio Negro, generating added value to the export products of these industries.

• Hydrogen is a product of high added value and high demand at a global level, which means that once the domestic market is supplied, there is assured and sustained external demand in the long term, driven mainly by the European Community, part of Asia and Australia.

• In relation to the previous point, this project would position itself as a great generator of two central elements in the economy of Río Negro: i) the need for local labor and ii) the birth of an industry based on applied science with a clear export bias in the future.

• On the financial side, it would generate a genuine possibility of issuing certified Rio Negro green bonds as well as H2V cryptocurrencies. Rio Negro would be the first province in this area generating market and large volumes of liquid funding from these sources.

• On the insurance side, it will be possible to develop a whole new range of coverage for the different links in the new production chain (generation, transport, production, storage, etc.), which would position our state insurance company as a national leader in this field.